What do you do with what you see? 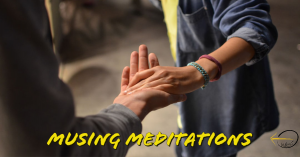 Think of a time in your life when you’ve been in close proximity to someone you love, something has happened, and you’ve been able to see the hurt in his/her eyes.
None of us like to see others hurt. It evokes feelings in us that often cause us to react. And not always positively.
If we are the source of the hurt we sometimes become defensive or withdrawn.
If we know the cause of the hurt there is a tendency to project anger onto the source because it hurts us to see those that we love hurting.
There was a guy by the name of Simon the Cyrene who saw deep, deep hurt first hand.
He was traveling to Jerusalem for the Passover and while he was on his way he got caught up in the throngs of people lining the roads, bystanders for the walk to Golgotha. That was where the three crucifixions of the day were going to take place. Before he knew what was happening a Roman soldier grabbed him and told him to take the cross from Jesus of Nazareth and carry it the rest of the way.
When Simon got the cross, it would only make sense that he looked into the eyes of Jesus. And can you imagine what he saw?
There had to be a hurt there that pierced his soul.
He carried the cross, we believe, the rest of the way up the hill.
When we see deep hurt in the eyes of those that we love, what do we do?
Do we allow it to pierce our souls and motivate us to love them more? To care for them, to help them carry their pain?
We each are called to love and give of ourselves in the way Simon did.
How can you do that better today?
Matthew 27:
32 As they went out, they came upon a man from Cyrene named Simon; they compelled this man to carry his cross. 33 And when they came to a place called Golgotha (which means Place of a Skull), 34 they offered him wine to drink, mixed with gall; but when he tasted it, he would not drink it. 35 And when they had crucified him, they divided his clothes among themselves by casting lots;[m] 36 then they sat down there and kept watch over him. 37 Over his head they put the charge against him, which read, “This is Jesus, the King of the Jews.”
Post Views: 42