What are you willing to push for? 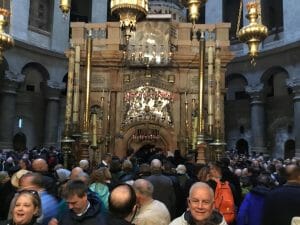 It was so crowded, the day we went to the Church of the Holy Sepulcher in Jerusalem last year. Truly, you had to hold on to the shirt of the person in front of you at times to not be separated and get lost in the masses. We were guided to the top of the church because “tradition said” it was where the crucifixion/burial happened, buried deep beneath the church that now resides there. You could glance through a hole and see some stone that perhaps once held the cross of Christ. (There was also another site, most likely more authentic). But – “tradition said” it was that space, so now it is revered as holy.
Thus, the masses flock there.
And religious services are held there.
Our group happened to get there right as one of the services was getting ready to dismiss, so our guide wanted us to move quickly to get in line. Since I’d been there before, I figured one less person in the masses would not be a bad thing so a few of us gathered on the steps outside the temple door. I noticed a few people with physical impairments waiting in line at the bottom of the steps, trying to get in.
All of a sudden there was loud yelling and we saw people being pushed to the side. Security guards with batons were manhandling the masses to create a pathway for a procession.
Then, with much pomp and circumstance the religious leaders started filing out the doors, incense burning, chanting their prayers.
One of the young men on crutches who was waiting to get into the temple was pushed by a guard so hard he stumbled and almost fell.
As the religious leaders marched past him he said, “I don’t think Jesus would push me out of the way so he could perform his ritual.”
A priest turned toward him, scoffed, shook his head, and continued walking.
After the procession was finished, the young man slowly made his way into the masses.
I hope he found the peace and comfort inside he was looking for. But – he had to fight his way in to seek it.
There’s a lot of pushing and fighting right now in our midst.
Fighting fear and anxieties . . . fighting pain, sadness, and loneliness.
Fighting financial insecurity . . .
Pushing for answers . . . pushing for reasons to make the situation we find ourselves in make sense.
Trying to reconcile a God of healing power with the virus that seems to be suspending our normal reality.
The young man was right. Jesus wouldn’t push anyone away so that he could perform a ritual. What he would do would be to push and fight for people to be engulfed in great love.
What do you need to fight away today so that you can experience the great love and peace of God?
What thoughts need to be pushed aside so that great ones, positive ones can fill the space?
Maybe that is what we hold onto today.
Grace and Peace,
Andrea