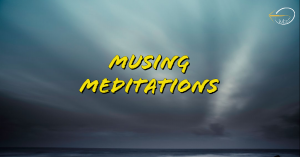 Listen to the podcast here!

At 12:55 a.m. Tuesday, a storm rolling through the Nashville area produced a tornado that left destruction in its path. By 3 a.m., there were reports of hundreds of buildings destroyed and two dozen fatalities.
At 5:10 a.m., NWS Nashville tweeted “Nashville….your severe threat is over.” The storms had passed through the area, yet the true extent of the damage would become apparent after the sun rose.
Multiple people were interviewed and each shared that the storm came so suddenly, it was hard to be prepared.
“Our phones went off with the alarm that a storm was imminent. We got our daughter and our dogs and got in the master bedroom closet. Right when we got in I could hear that roar that is characteristic of a tornado. We huddled, we prayed. It probably wasn’t 60 seconds later when it hit.” Michael Shirley said.
When Jesus got in the boat with the disciples to sail to the other side of the Sea of Galilee, they had no idea a storm was coming. Storms on the Sea of Galilee, because of its geographical location, came (and continue to come) without warning. Jesus had been teaching and preaching from the boat, and after experiencing deep tiredness, laid down in the boat to go to sleep. While he was sleeping the drastic storm came.
Storms in life aren’t predictable.
They come without warning. Sometimes we have little time to prepare and seek refuge and shelter.
Perhaps we should think through how we are preparing ourselves for our storms before they arrive?
Jesus did some pretty key things that model for us how to prepare ourselves for life’s biggest storms. Over the next several days in the meditations we will explore those actions.
But before then, let’s take a few moments to examine our lives and ask ourselves, “Are we prepared for a sudden and tragic life storm?” If not, then let’s intentionally begin to think through what that looks like so we can weather the storm with minimal damage done to our souls.
The sun did eventually come out in Tennessee.
The devastation was so evident . . . but so was the people’s strength. We all possess that same strength. We just have to make sure we are in touch with it.
“Late that day he said to them, “Let’s go across to the other side.” They took him in the boat as he was. Other boats came along. A huge storm came up. Waves poured into the boat, threatening to sink it. And Jesus was in the stern, head on a pillow, sleeping! They roused him, saying, “Teacher, is it nothing to you that we’re going down?” Mark 4