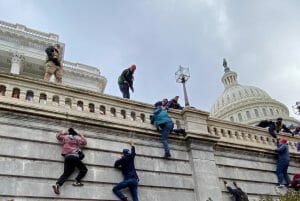 “It is during our darkest moments that we must focus to see the light.” Aristotle
Yesterday I had various commitments that required my being in the car most of the day. So, I had no idea what was going on or had gone on in our nation’s history.
Once I arrived home and began watching the news, some of the images looked like something from the movies. “Olympus Has Fallen” . . . “Air Force One” . . .
But this was no movie. It was a moment that will forever be etched in our history. Different media reports claim different “attacks on the capitol” in our history, so I’m not going to say when the “last one” occurred. However, I think we can all agree . . . it’s been a while (and nothing in any of our current lifetimes) since something like yesterday happened.
West is a church where “all means all.” That means we all fall at various places on the political spectrum. As the pastor, I’ve had the opportunity to hear logical arguments from folks on “both sides” of the issues of our current political state. Thus, my words now are not to “side” with a particular side.
What I would remind us, as “followers of The Light (aka Jesus),” is that we each have opportunities as we exist in our life’s journey to leave an impact.
What do you want your impact on and in this world to be? Never underestimate your power!
One marked by revenge, anger, and hate?
One marked by respect, peace, and love?
Please take a few moments to read these words from Jesus from the book of Matthew:
Salt and Light
13 “Let me tell you why you are here. You’re here to be salt-seasoning that brings out the God-flavors of this earth. If you lose your saltiness, how will people taste godliness? You’ve lost your usefulness and will end up in the garbage.
14-16 “Here’s another way to put it: You’re here to be light, bringing out the God-colors in the world. God is not a secret to be kept. We’re going public with this, as public as a city on a hill. If I make you light-bearers, you don’t think I’m going to hide you under a bucket, do you? I’m putting you on a light stand. Now that I’ve put you there on a hilltop, on a light stand—shine! Keep open house; be generous with your lives. By opening up to others, you’ll prompt people to open up with God, this generous Father in heaven.
After the election, when there was so much contentiousness among us (and apparently, there still is) we had a message about “politics.”
It was interesting . . . that was the one message in the past 9 months of not seeing you that I received the most feedback about.
The reason people wrote?
Because there was no “taking a side” but instead I tried hard to remind us all what it looks like to exist in a tumultuous political climate and still be people marked by Love.
If you didn’t watch that message, for whatever reason, I really do invite you to do so. I normally don’t “self-promote” but I really feel it is important that we lead boldly as Jesus-followers in a time such as this.

Message on Being Love in a Tumultuous Political Climate