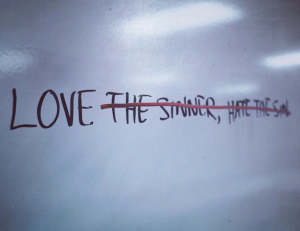 “Love the sinner, hate the sin” is one of the Christian clichés that we think are found in Scripture but actually, the statement as a whole, is not. There are “like” thoughts/statements in Scripture that we will explore this week that lend us to believe “Love the sinner, hate the sin” is present. However, the concept is not one of Jesus, and actually does damage when we use it as a mantra.

As Adam Hamilton puts it, there are some “half-truths” to the phrase . . . we are indeed called to “love sinners” . . . but to join the phrases, “Love the sinner but hate the sin” . . . well, they don’t go together. When we TRY to put them together, we run into some trouble.

There were people during the days of Jesus who lived as if it were their primary job to be the “sin patrol.” They were the religious leaders, known as the Pharisees; they were the “keepers of the law.”

It’s important to note, however, that the Pharisees weren’t malicious in their keeping of the law and judging others. Their motivation was pure. They were actually trying to help others encounter God and it was believed that to get closer to God, you had to obey the 600+ laws.

The unfortunate part of their action was that in trying to help others grow closer to God by enforcing the laws, they actually began to drive them away with their condescending spirit.

Check out the story of a time when the religious leaders caught a woman committing the act of adultery and drug her into the street, in front of everyone, so that she could be stoned.

To Throw the Stone

8 1-2 Jesus went across to Mount Olives, but he was soon back in the Temple again. Swarms of people came to him. He sat down and taught them.

3-6 The religion scholars and Pharisees led in a woman who had been caught in an act of adultery. They stood her in plain sight of everyone and said, “Teacher, this woman was caught red-handed in the act of adultery. Moses, in the Law, gives orders to stone such persons. What do you say?” They were trying to trap him into saying something incriminating so they could bring charges against him.

6-8 Jesus bent down and wrote with his finger in the dirt. They kept at him, badgering him. He straightened up and said, “The sinless one among you, go first: Throw the stone.” Bending down again, he wrote some more in the dirt.

9-10 Hearing that, they walked away, one after another, beginning with the oldest. The woman was left alone. Jesus stood up and spoke to her. “Woman, where are they? Does no one condemn you?”

Jesus encouraged the sinless ones to go first.

There were no “sinless” people. Thus the woman was not stoned.

The beautiful thing about a relationship with God thru Christ is this gift of mercy and grace we all receive.

We are ALL sinners. Paul writes, “all have sinned and fallen short” . . . but even in our sin we are not condemned. We are loved.

In that love we are also encouraged to live differently. To live in such a way that our actions and thoughts don’t drive us away from God/Love but instead draws us to God/Love.

That is the part we are challenged to do for ourselves, “to go and sin no more.”

Not go patrol others so that they don’t “go and sin” . . . but instead to do it ourselves.

Maybe that is where we can start this week? Looking within and at our own actions rather than that of others. And IF we are determined to look at others, may we look as Jesus looked. Not with condemnation and judgment, but only with love.