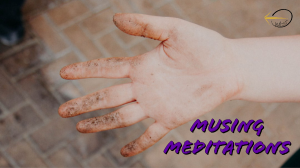 Last summer as the youth were on the mission trip to Wilmington, NC we found ourselves in the middle of a mess.
It was an unfortunate situation for a gentleman who wrestled with hoarding, literally. His home had been badly damaged by one of the hurricanes and his floors were rotten. We had to move tons of things around to try to pry up small pieces of the floor at a time to then move it back so we could continue to work.
The more we worked to pull up his flooring, the worse the work became. I’m not sure what was used to put that linoleum on the plywood but . . . it was committed to remaining there!!!
Regardless of how hard we worked, we just couldn’t get the stuff up. Yet, that was the task that had to be done. So, we sanded, scraped, used some kind of electrical tool – whatever it took, at some point we even tried a crowbar, to try to get that stuff up off the floor. For six hours we worked.
That afternoon as we were getting in our cars to head back to the church we took off our safety glasses, our gloves, and the face masks. We were SO DIRTY that you could make out clear outlines where those items had been. Our work left some temporary marks on our bodies because it was so messy.
The unfortunate thing was after the day ended, once we showered, the “marks” of our labor were gone. Everything returned to normal except for some sore arm muscles.
For Simeon, his work was messy. He was commanded to pick up the cross of Jesus and carry it the rest of the way. There is no way he did that without getting dirty – blood, sweat, maybe even some tears mixed together as he carried the 100 lb weight up the hill. The messiness he experienced didn’t clean up the way ours did on that trip to Wilmington.
The messiness he experienced left a palpable mark on his life. So much so that as we continue reading in the New Testament we will note that his sons are addressed personally by the Apostle Paul. His legacy was such that his sons became important people in the Christian movement.
Sometimes it is better for us if the marks of our service and love don’t wash off so easily. Simeon’s didn’t and he left a legacy.
What can we do with the messiness of being a people of faith? What cross can we pick up today?
And they compelled a passerby, Simon of Cyrene, who was coming in from the country, the father of Alexander and Rufus, to carry his cross. (Mark 15:21)
Post Views: 34