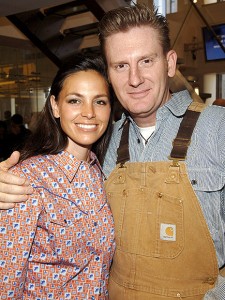 In June 2014, Joey was diagnosed with cervical cancer not long after the birth of the couple’s daughter, Indiana, who was born with Down syndrome.[18]

In 2015, Joey announced that the cancer had returned and spread to her colon. And later than year revealed the cancer was terminal, and they were stopping all treatment.[20]

In a November 2015 interview with The Tennessean, Joey stated that she was not angry or depressed with God but was disappointed, that after undergoing radical gynecological surgery to eradicate it, the cancer had returned as inoperable and terminal.

In the article, Joey said she hoped to die peacefully in her sleep, to live to see Christmas of 2015 and, if possible, her daughter’s second birthday in February 2016, all of which she achieved.

Please take a few moments to read her husband’s blog, written upon her death.

I imagine is was/is during this time that he has found his strength and resilience by calling out “WHEN” . . . clearly his beautiful words reveal the answer . . .

“My wife’s greatest dream came true today.  She is in Heaven.

The cancer is gone, the pain has ceased and all her tears are dry.  Joey is in the arms of her beloved brother Justin and using her pretty voice to sing for her savior.

At 2:30 this afternoon, as we were gathered around her, holding hands and praying.. my precious bride breathed her last.  And a moment later took her first breath on the other side.

As I held her hand and kissed her goodbye one last time… I was reminded of another dream of hers that came true.  A few months ago through gracious help of Kathy Olen, a friend of ours in Nashville, and many others… I had been sent a short video that Dolly Parton had made for Joey.

From the time she was four years old, Joey had been singing Dolly’s songs and dreamed of one day meeting her.  Coat of Many Colors was a regular part of our show and at home she loved to put on Dolly and listen to “Hello God”, “When I Sing For Him”, “Me and Little Andy” and many others.  She never got the chance to meet her in person and had no idea that Dolly even knew who she was.  But that changed one Friday evening this past November.

Joey’s family, Russdriver and I gathered around Joey’s bedside to watch the movie “Hope Floats” (one of the few movies Joey knew and loved) with her.  But instead of pushing play on the DVD, I pushed play on the video I had received… and we all watched Joey watch.  It was the most beautiful moment I have ever been part of…

Though this is, and has been, a time of many tears of sorrow, it has also been a time of countless tears of joy.  There have been too many beautiful moments to count or even begin to share in this blog.  But I try.

When a person has been through as much pain and struggle as Joey’s been through, you just want it to be over.  You want them to not have to hurt anymore, more that you want them to stay with you.  And so, it makes the hard job of saying goodbye just a little easier.

After four-and-a-half months in Indiana, we will soon be back home in Tennessee.  Me, and our little one, with our older daughters.  It’s hard for me to imagine being there without Joey, but at the same time… it is where she wants us to be.  It’s where she will be…  She’s gonna be in the mint growing beside our back deck, the sweet-corn frozen in our freezer and a million other places that her hand and heart has touched around our little farmhouse and community.  Joey will still be with us.  Everywhere.

So if it’s okay, I’m gonna close, wipe my tears and pack our bags to hit the road headed south.

She’s already got a head-start on me.”

12-15 “I still have many things to tell you, but you can’t handle them now. But when the Friend comes, the Spirit of the Truth, he will take you by the hand and guide you into all the truth there is. He won’t draw attention to himself, but will make sense out of what is about to happen and, indeed, out of all that I have done and said. He will honor me; he will take from me and deliver it to you. Everything the Father has is also mine. That is why I’ve said, ‘He takes from me and delivers to you.’