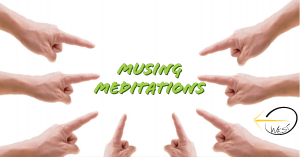 “Well Andrea, I’ve probably screwed up.” My clergy friend explained he’d frustrated a church member so much so that she’d left the church.
The first time she met with him he heard her concerns. She felt like the people on her ministry team didn’t like her. He gave her the validation he felt she needed but also encouraged her to have honest conversations with her team so that they could find a healthy resolve. She left, committed to meeting with the folks on her team.
Time passed. He noticed they would sit near each other in worship so he felt like all was right in their world. Then she requested another meeting. She explained that they just weren’t nice to her and ignored her in worship. He acknowledged her hurt feelings. However, again, he strongly encouraged her to voice her concerns to the people. Conflict is never resolved if we just “talk around it,” we must take it to the ones we have the conflict with.
Another month passed and he confessed he really forgot about the entire situation. Until he received an email that she was stepping down from leadership and leaving the church. He reached out and they had one final meeting.
“Can you please tell me what steps you took to resolve this issue? I understand if you want to find another church but I hate for you to walk away wounded. That’s the last thing any church should do is wound one of its people.”
“I kept holding our meetings. They would never invite me out to eat with them after church. I sat near them in worship. They didn’t even acknowledge I was there or speak to me. I waited on them to reach out to me, nothing happened. They aren’t being good Christians to me.”
My friend shared with me that perhaps he’d overstepped because those statements were the most classic example of placing blame without any accountability. And they pushed him just a little too far.
He replied to her, “I hear your frustration. And we’ve met about this issue/these people multiple times. Each time I asked you to take some action to resolve the conflict, to instigate conversation so that the hurt feelings could be addressed. You seem pretty happy to tell me what they are doing “to” you, the question is, what have you done “to” them to try to make it better? Did you invite them out to eat or to do something socially? No. Did you speak to them in worship or just wait and watch to see if you would be spoken to? You just waited. And it was never enough. I’m sorry that things haven’t worked out the way you wanted them to but at some point, you had to take some action too. You just can’t wash your hands of it and think you hold no blame.”
He explained to me that his words didn’t sit well. She left the meeting and that was the end of their time at the church he served. He asked me where he went wrong.
He spoke out of love each time. He listened yet pushed and held accountable. There wasn‘t anything necessarily “wrong” with what he did. The problem truly was that she just wanted to wash her hands of responsibility.
Pilate did that with Jesus. After he let the “popular opinion” make the decision of who to crucify, he turned Jesus over to the crowd. He could have led. He could’ve claimed his power as a governmental authority. He could have used his voice to make a difference. But he just washed his hands of it, deflecting and denying his responsibility.
Where can we take some ownership in our lives today?
What do we need to do confront situations that we are involved in that need healing, peace, and resolve?
Matthew 27:
24 So when Pilate saw that he could do nothing, but rather that a riot was beginning, he took some water and washed his hands before the crowd, saying, “I am innocent of this man’s blood;[k] see to it yourselves.” 25 Then the people as a whole answered, “His blood be on us and on our children!” 26 So he released Barabbas for them; and after flogging Jesus, he handed him over to be crucified.