Mother Teresa is one who has truly embodied the teachings and life of Jesus of Nazareth. 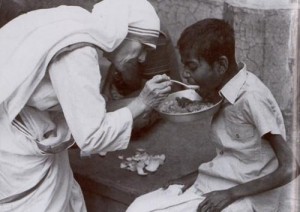 She loved the scorned . . .
Touched those whom others ignored . . .
Fed the hungry . . .
and had a devotional life with God that was one of constant communion.
Now, picture what the world would have done if . . .
she was put on trial for feeding those who were starving.
If she was sentenced to death for breaking the rules of organized religion.
If she were beaten beyond recognition before she was forced to carry the device that would facilitate her death.
If she were put to death in a public manner, for all the world to see. 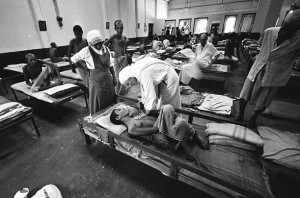 What would have happened?
How would you feel?
It is not too difficult for our imaginations to ponder the above circumstances.
Now . . . take those thoughts and move them back a few thousand years.
The very one who embodied all that is mentioned above went through all that and more.
When he breathed his last breath, the world was engulfed in darkness.
Darkness means without light.
For a period of time, the followers of the one who embodied the passion, nature, and love of God lived in complete darkness.
For now – we wait in darkness.
We wait . . . pondering what it means when there is no light to follow . . .

They took Jesus away. Carrying his cross, Jesus went out to the place called Skull Hill (the name in Hebrew is Golgotha), where they crucified him, and with him two others, one on each side, Jesus in the middle. Pilate wrote a sign and had it placed on the cross. It read:

jesus the nazarenethe king of the jews.

20-21 Many of the Jews read the sign because the place where Jesus was crucified was right next to the city. It was written in Hebrew, Latin, and Greek. The Jewish high priests objected. “Don’t write,” they said to Pilate, “‘The King of the Jews.’ Make it, ‘This man said, “I am the King of the Jews.”’”

23-24 When they crucified him, the Roman soldiers took his clothes and divided them up four ways, to each soldier a fourth. But his robe was seamless, a single piece of weaving, so they said to each other, “Let’s not tear it up. Let’s throw dice to see who gets it.” This confirmed the Scripture that said, “They divided up my clothes among them and threw dice for my coat.” (The soldiers validated the Scriptures!)

24-27 While the soldiers were looking after themselves, Jesus’ mother, his aunt, Mary the wife of Clopas, and Mary Magdalene stood at the foot of the cross. Jesus saw his mother and the disciple he loved standing near her. He said to his mother, “Woman, here is your son.” Then to the disciple, “Here is your mother.” From that moment the disciple accepted her as his own mother.

28 Jesus, seeing that everything had been completed so that the Scripture record might also be complete, then said, “I’m thirsty.”

29-30 A jug of sour wine was standing by. Someone put a sponge soaked with the wine on a javelin and lifted it to his mouth. After he took the wine, Jesus said, “It’s done . . . complete.” Bowing his head, he offered up his spirit.

31-34 Then the Jews, since it was the day of Sabbath preparation, and so the bodies wouldn’t stay on the crosses over the Sabbath (it was a high holy day that year), petitioned Pilate that their legs be broken to speed death, and the bodies taken down. So the soldiers came and broke the legs of the first man crucified with Jesus, and then the other. When they got to Jesus, they saw that he was already dead, so they didn’t break his legs. One of the soldiers stabbed him in the side with his spear. Blood and water gushed out.

35 The eyewitness to these things has presented an accurate report. He saw it himself and is telling the truth so that you, also, will believe.

36-37 These things that happened confirmed the Scripture, “Not a bone in his body was broken,” and the other Scripture that reads, “They will stare at the one they pierced.”.