Are You Surviving or Living? 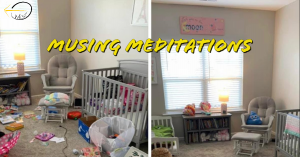 We expect those that we love to be a safe place for us in our storms.
We need them to be an anchor for us when it seems that all around us is crumbling.
The disciples would have been familiar with storms on the Sea of Galilee. So the storm they endured had to be significant. Thus, their fear and disappointment in the fact that it seemed like their friend totally didn’t care about their well being.
Right before they embarked on the boat Jesus taught those following him about not hiding the power and light that comes from his love. It had to be inspiring because that is when the throngs began to follow him wherever he went.
But – then the horrific storm came. They were so afraid! They forgot their faith . . . their anchor and they reacted out of their fear and disappointment.
In those moments they were not focused on truly living, they were focused on truly surviving.
There’s a difference between those two things, you know.
Living and surviving.
Sometimes it is hard to think about living and loving when it seems that it takes all our energy to focus on surviving.
Drake Smith and Tyler Antrican have been a part of West for years. The West community has been prayerfully supporting them as they began fostering two of the most adorable little girls. Their foster daughters became a part of West’s children’s ministry and if you saw a crowd gathered in a huddle after worship, you could assume that those little girls were the center of attention.
Then, the Tuesday before Thanksgiving they told me that one of the little girls would be leaving their home. This was sudden and a devastating disappointment. The next days turned into weeks, the weeks became months. The pain was palpable and life-stopping.
Sunday after worship, talking with Drake and Tyler, they shared with me that they were ready to live again. That for the past several months they had been merely surviving. But, now, they were ready to live again . . . and see what the future would hold. They claimed their faith. They knew/and know that the God who loves them infinitely didn’t desert them but is instead there to be their anchor as they come out on the other side of the storm.
See these words from Tyler below.
And may we all remember . . . we do eventually make it through even the darkest of storms. But – it does require us making a decision, actually – THE decision – that surviving and then TRULY LIVING is something we must do! 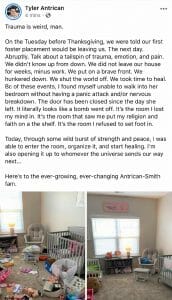